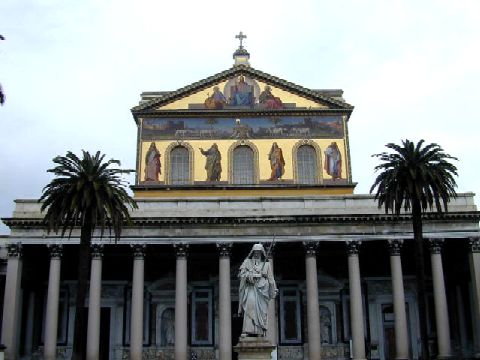 Archaeologists working for the Vatican have unearthed a sarcophagus containing what they believe are the remains of St Paul the Apostle.
The tomb dates back to at least AD390 and was found in a crypt under a basilica in Rome.

It has long been thought that the crypt contained the tomb of St Paul but the altar had hidden it.

St Paul was an influential early Christian who travelled widely in the Mediterranean area in the 1st Century.

Excavations at the site began in 2002 and were completed last month.

The basilica of St Paul’s Outside the Walls is the largest church in Rome after St Peter’s.

For the past three years, archaeologists have been excavating underneath the altar to remove two huge slabs of marble and now, for the first time in almost 1,700 years, the sarcophagus of St Paul is on public view.

The holes through which the ancient pilgrims would have pushed pieces of cloth to touch the relic are clearly visible.

“What we can see at the moment through a grating, a new grating that’s been put there, is the side of the sarcophagus of Paul which seems to be white marble-like material,” said Father Edmund Power, abbot of the nearby Benedictine monastery.

His letters to the early churches, found in the Bible’s New Testament, are arguably some of the most influential on Christian thinking.

St Paul is said to have been beheaded in AD65 by the Roman Emperor Nero.

His sarcophagus will be on public view for the foreseeable future but the church is yet to rule out the possibility that one day the interior itself will be opened and examined.

This entry was posted in in English, News, Vatican.