Radio Review – The Ark: Trial of the Templars 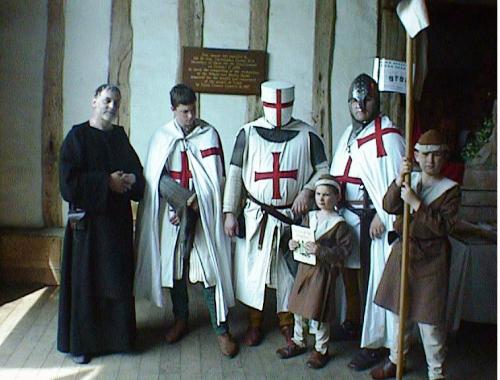 This week on The Ark presenter Rachael Kohn talks with Associate Professor for Medieval Studies at the University of Sydney, John Pryor about documents which shed new light on the persecution of the Knights Templar that rehabilitates the image of the medieval Christian military order.

At dawn on 13 October 1307 all the Templars in France were arrested by royal order, on the charge that they had been involved in secret blasphemous rituals. This led to other arrests of Templars in Europe, and an investigation by Pope Clement V. The University of Sydney Rare Books and Special Collections Library recently obtained trial documents from the Vatican archives, which John Pryor discusses with Rachael Kohn.

This entry was posted in Australia, Crusades, in English, Interview, News, Opinion, Podcast.

Sydney University has bought Australia’s only copy of reproduction manuscripts of the 14th century trials of the Knights Templar that rehabilitated the order.

The University of Sydney has purchased a $10,000 reproduction of a document that rehabilitates the medieval Christian military order, the university press service reports.

The Knights, recognisable by the white robes with a red cross they wore over their chain mail, guarded pilgrims visiting the Holy Lands. In the early 14th-century. King Philip IV of France accused the knights of heresy and sodomy, and many of the order’s leaders were burnt at the stake.

“The crux of these trial documents is that Pope Clement V didn’t think the Templars were guilty of heresy,” says Neil Boness, Rare Book librarian at the University’s Fisher Library.

It is “very unusual” for the Vatican to release a reproduction of material from the Secret Archives such as this, known as the Processus Contra Templarios – Papal Inquiry into the Trial of the Templars, he added.

According to John Pryor, Associate Professor for Medieval Studies at Sydney, there was “significant pressure” exerted on the Pope by the King’s agents to find the order guilty.

“Several thousand of the order survived in Spain and elsewhere, but mainly they disappeared into society,” says Pryor. He hopes the documents will assist potential PhD students: “There is a huge scholarly interest in the trials.”

The order was popularised by Dan Brown’s book The Da Vinci Code, and has been the subject of all sorts of myths and legends over the years. The Knights have been linked to the modern-day Freemasons, and portrayed as guardians of the Holy Grail.

The key document in the reproduction is known as the Chinon Parchment and it shows that the Pope absolved the Knights of heresy charges. It was “misplaced” in the Vatican archives until it was discovered by a researcher in 2001.

The elaborate reproduction is bound in an ornate leather case, and includes scholarly notes and reproductions of the original parchments – mould stains and all – as well as the wax seals used by their inquisitors.

Only 799 copies were made: Pope Benedict was given the first copy, and the University owns copy number 300.

This entry was posted in Australia, Books, in English, News, Religion, Vatican.

Churches back plan to unite under Pope

Radical proposals to reunite Anglicans with the Roman Catholic Church under the leadership of the Pope are to be published this year, The Times has learnt.

The proposals have been agreed by senior bishops of both churches.

In a 42-page statement prepared by an international commission of both churches, Anglicans and Roman Catholics are urged to explore how they might reunite under the Pope.

The statement, leaked to The Times, is being considered by the Vatican, where Catholic bishops are preparing a formal response.

It comes as the archbishops who lead the 38 provinces of the Anglican Communion meet in Dar es Salaam, Tanzania, in an attempt to avoid schism over gay ordination and other liberal doctrines that have taken hold in parts of the Western Church.

The 36 primates at the gathering will be aware that the Pope, while still a cardinal, sent a message of support to the orthodox wing of the Episcopal Church of the US as it struggled to cope with the fallout after the ordination of the gay bishop Gene Robinson.

Were this week’s discussions to lead to a split between liberals and conservatives, many of the former objections in Rome to a reunion with Anglican conservatives would disappear. Many of those Anglicans who object most strongly to gay ordination also oppose the ordination of women priests.

Rome has already shown itself willing to be flexible on the subject of celibacy when it received dozens of married priests from the Church of England into the Catholic priesthood after they left over the issue of women’s ordination.