WHETHER OR NOT YOU’VE READ The Da Vinci Code and subsequent thrillers, you may have heard of the Knights Templar. A few facts can be confirmed about the Knights. A group of pilgrims traveled to Jerusalem in 1119, and some of them were armed and followed a strict, religiously inspired code. Here’s where the facts get muddy. According to the story, nine among them took vows to become monks and were trapped in the Temple of Solomon. Or so the story goes…

Named Knights Templar because of the Temple of Solomon (“templar” meaning of the temple) their group quickly blossomed as more pilgrims began traveling to Jerusalem from Europe. Muslim–Christian tensions in Jerusalem rose, and it became very expensive to protect the Christian pilgrims. Funds were raised from Europe as the Knights grew in number and prestige.

Back in London, the Knights began to influence politics. With wealthy friends and their Church in central London, the Templars became intertwined in the financial and domestic concerns of the burgeoning English nation. The Master of the Church was an ex officio member of Parliament: separation of Church and State was more than five hundred years away.

With a distinct round nave, the Temple Church was consecrated in 1185. The round church is modeled on the Church of the Holy Sepulchre in Jerusalem. (In a twist of fate, that church may originally have been a temple to Aphrodite in the second century.)

But by the late 1200s, the Crusades weren’t going so well, and, with other troubles in France, the clout of the Knights waned. When they eventually fell in 1307, their land was seized by the Crown. King Edward II used the land and buildings for law colleges that developed into the present-day Inns of Court.

During World War II, German firebombs damaged the roof of the Temple Church, but it has since been restored. Visit the website for details about when the sanctuary is open for services and musical performances.

Side note: the library at Middle Temple owns valuable antique maps. These maps depict land we now know not to exist, but they are fascinating, nonetheless. A 1570 edition Abraham Ortelius’ Theatrum Orbis Terrarum (Theater of the World). Check the Middle Temple Library website for times.

This entry was posted in Articles, England and Wales, History, in English, Templar Sites, Travel and tagged church, london, Templars. 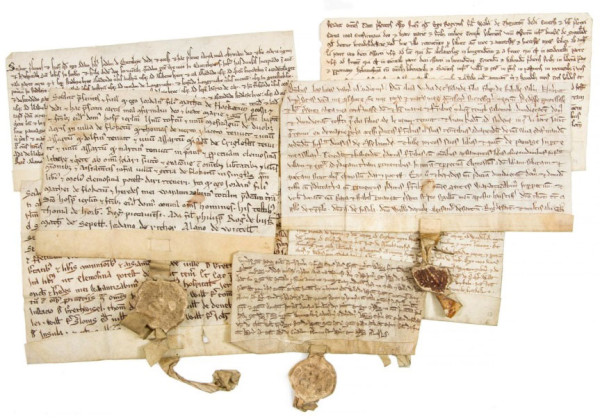 A significant archive of 28 charters and deeds granting gifts of land and property in West Yorkshire to the Knights Templar and Knights Hospitallers is being auctioned at Dreweatts and Bloomsbury Auctions’ Printed Books, Maps and Manuscripts sale on Thursday 17th and Friday 18th July 2014.

Simon Luterbacher, Director of Manuscripts & English Literature at Dreweatts & Bloomsbury Auctions said: “Documents relating to the Knights Templar are extremely rare and highly sought after; an archive of this size and quality has not been seen in auction for over 50 years, and likely won’t be again.”

The Knights Templar was a Christian military order founded after the first crusade by Hugo de Payens and Bernard of Clairvaulx to defend pilgrims travelling between Europe and the Holy Land. The order was established in England during the reign of Henry II and quickly gained a large estate throughout several counties, and Yorkshire in particular.

They enjoyed patronage under several kings, especially Richard I, King John and Henry III and were noted for their financial dealings. The order became a favoured charity throughout Christendom when they were officially endorsed by the Catholic Church around 1129; they grew in membership and power.

With their distinctive white mantles with a red cross, Templar Knights were the most skilled and feared fighting units of the Crusades. Once the Holy Land was lost and rumours of the secret initiation ceremony began to circulate and created mistrust, the order was suppressed by order of Philip IV of France in 1307, and later, in England in 1308.

As with the Knights Templar, the Knights Hospitallers had a military function and gained large estates in the twelfth century. In the 1140s the Order was granted ten acres of land in Clerkenwell, which became their headquarters and of which the gateway still remains and is now the museum of the Order in England. After the fall of the kingdom of Jerusalem, the order moved its headquarters, briefly to Cyprus, then until 1522 to Rhodes, and finally, Malta.

Ten of the 28 are charters and deeds of gifts to the Knights Templar of Temple Newsam comprising:

Richard de Rihil [Ryhill], of c. 20 acres in South Crossland, land in Waderode (land on the river Calder), one and a half acres by the moor near Adam le Venur with rights of burning, building and fencing (3 deeds); Lady Alina, widow, of Crossland, daughter of Philip de Rihill, of half a house or toft, which Elias, son of Adam le Venur held and the right to take wood for building and burning within the boundaries of Crossland, as well as pannage for their pigs within the boundaries of the donors woods and others.

Seventeen of the 28 are charters and deeds of gifts to the Knights Hospitallers of the preceptory of Newland comprising:

Alan, son of Simon de Wately, of all Hardinge Rode and land in Colresle; Robert de Weteley [Whitley or Wheatley], of a third part of the land his uncle gave in Whitley; Matilda of Stanforham of 3s which Jordan, son of Matthew pays from the rent of Flackton [Flockton]; Elias, son of Haswi of Heton [Kirkheaton], of land in Heton; William, son of Michael of Brethwisel, of land in Brethwisel; Adam, son of Robert de Notton, of land between the stream and castle of Almanbira [Almondbury]and others.

The final deed is by Adam, son of Adam de Byrkeg de Cumberward to Peter of Colriselay, granting the land and messuage of the Hospital of Jerusalem in Crossland.

The sale will be held on Thursday 17th and Friday 18th July 2014 at Dreweatts & Bloomsbury Auctions’ saleroom in London’s Mayfair. Viewing is at Bloomsbury House on Tuesday 15th July 9:30am – 5:30pm, Wednesday 16th July 9:30am – 7:30pm and day of sale from 9:30am. The catalogue will be available to view online at www.bloomsburyauctions.com

This entry was posted in Art, England and Wales, History, in English, News and tagged auction, historic, london, manuscript, order of the temple, original, seal, Templars.