An appetising aroma of sheep’s cheese and smoked chorizo sausages wafted through the stalls of Estremoz’s famous Saturday market. This weekly extravaganza shows off the best of the Alentejo’s local produce, including olives, chutneys, honey, fruit, vegetables and colourful ceramics. It is also home to a superb ‘flea market’ with stalls offering everything from coin collections to cowbells! The market is held in the Rossio Marquês de Pombal, a vast square at the town’s centre.

Estremoz exudes a real feeling of elegance and wealth, because high-grade white marble has been extensively used in the construction of its churches, civic buildings, streets and squares. So plentiful is the availability of top quality marble from the many quarries in this part of the Alentejo, that Estremoz and the nearby towns of Borba and Vila Viçosa have even used it for the doorsteps of their humblest cottages.

Unseasonal rain and a chill wind cut short our perusal of the flea market so we scuttled away to visit another of Estremoz’s attractions, the celebrated Café Águias d’Ouro (Golden Eagles Café). Built early in the 20th century, this art nouveau coffee house has long been famed for political debate, so we were not surprised to be surrounded by men emotionally discussing the weighty matters of local politics. Here was a café with just the kind of atmosphere one reads about in Portuguese literature.

Next to the Rossio, there is a peaceful municipal garden and the picturesque Lago do Gadanha (Lake of the Scythe), named after its central scythe-wielding statue. Nearby are a couple of splendid churches – the Igreja de São Francisco and the Convento dos Congregados, the latter of which is also home to a museum of sacred art.

As the rain turned even heavier, we decided to cross the square to visit one of Portugal’s national monuments, the Convento das Maltesas. This historic building, once a hospital, has a charming cloister at its centre and houses Estremoz’s ‘Live Science Centre’ (Centro de Ciência Viva). It is a very impressive interactive and educational science museum, where children of all ages can learn about the wonders of our planet. Perfect for stimulating scientific curiosity!

The old city of Estremoz

The ‘Cidade Velha’ (old city), with its palace and castle, stands defiantly on top of the hill overlooking the new town far below. It is reached by following a labyrinth of narrow winding streets and through two sets of impressive medieval walls, the construction of which began in 1261. Estremoz Castle is the town’s classic landmark, built during the 13th century as a defensive fortress. Within this fortification, King Dinis later built a palace where he lived with his wife Isabel of Aragon. Queen Isabel was famously generous to the poor and gained the status of a saint amongst the local population. She even has a tasty almond-flavoured cake, the ‘Bolo Rainha Santa’, in her name.

The castle has an imposing 27m high tower made from white marble, and the palace next door has been converted into a luxurious Pousada. This majestic hotel was our comfortable home during our time in Estremoz and boasts two magnificent lounges and a stately dining room, all containing a fantastic array of period Portuguese furniture. The top of the tower is reached by access through the Pousada and has a wide-ranging view of the Alentejo landscape. There is a chapel to the saintly Queen Isabel behind the palace and her own skillfully carved statue stands in the square close to the base of the tower. However, she does look rather glum!

This same square also gives access to the Igreja de Santa Maria, built between the 16th and 17th centuries, and the fascinating Museu Municipal. Built in the Manueline style, the lovely Santa Maria church has tombstones emblazoned with coats-of-arms of many notable Portuguese families.

The museum has an eclectic display of Alentejana objects on show, from exquisitely carved figures in wood and cork depicting rural activities, to rooms depicting local life in the 19th century. But it is the colourful ‘Bonecos de Estremoz’ that catch the eye! Literally translated as ‘Dolls of Estremoz’, there are 500 of these colourfully-painted figurines made from clay. This original folk art is more than three centuries old and in 2017 was classified by UNESCO as an Intangible Cultural Heritage of Humanity.

We discovered that the restaurant A Cadeia Quinhentista (Old 16th Century Gaol), just behind the Santa Maria Church, had some great examples of the best of Alentejana cuisine. Its menu was stacked with interesting local dishes – from ‘Pézinhos de Coentrada’ (pork’s feet with coriander) to the famous dessert ‘Sericaia’ (egg pudding served with cinnamon and plum syrup).

No visit to this part of the Alentejo would be complete without seeing something of Elvas and Evoramonte. Elvas is a wonderfully preserved fortress town located further east, close to the Spanish border, and justifiably popular with military historians. It was the first line of defence against Spanish invasion and its walls were designed so that no side was left unprotected – resulting in a unique star arrangement of battlements.

Essential for outlasting a protracted siege was a reliable supply of clean water, and this was ensured by construction of a long and impressive aqueduct. Elvas managed to fend off three separate Spanish sieges, only falling in 1808 during the Napoleonic wars. We spent a fascinating day exploring the town’s cobbled streets, churches, the ancient castle and the impressive battlements.

Evoramonte is one of the Alentejo’s lesser-known jewels. This ancient little town to the west of Estremoz has a medieval quarter straddling a ridge 481 metres in height. A good road winds its way to the top and we parked close to its pretty church and immaculately-kept cemetery. The 16th century castle, built in the Italian renaissance style, is perched at the other end of the settlement at the highest point and offers remarkable views.

It was a joy to stroll along the one and only street, deserted on a bitterly cold day, and we just couldn’t resist purchasing a bottle of the local wine at the village gift shop. This became the final part of our simple Alentejo lunch at home the following day – delicious smoked chorizo, tangy sheep’s cheese, olives and wonderful Alentejo bread followed by a tasty ‘Bolo Rainha Santa’. Happy memories!

Nigel Wright and his wife Sue moved to Portugal 13 years ago and live near Guia. They lived and worked in the Far East and Middle East during the 1980s and 90s, and although now retired, still continue to travel and seek out new cultural experiences. His other interests include tennis, gardening and photography. 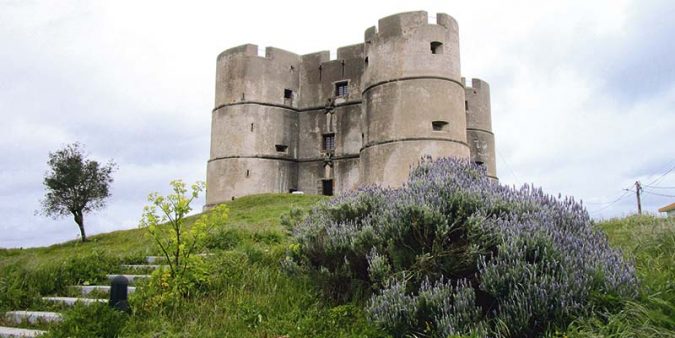 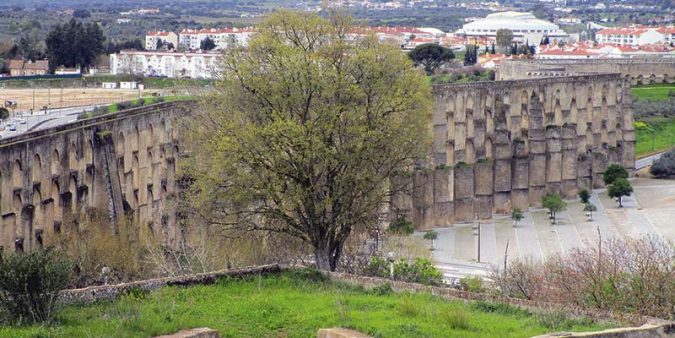 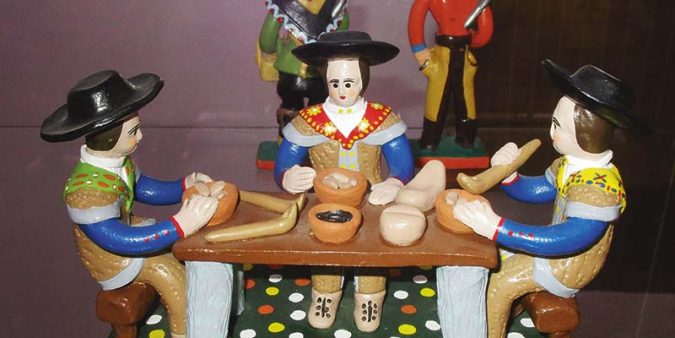 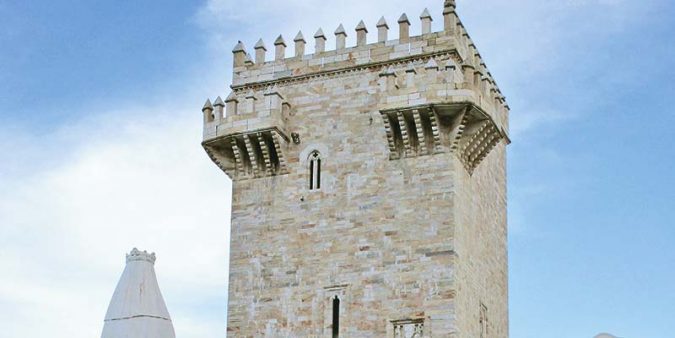 The castle tower is constructed from white marble 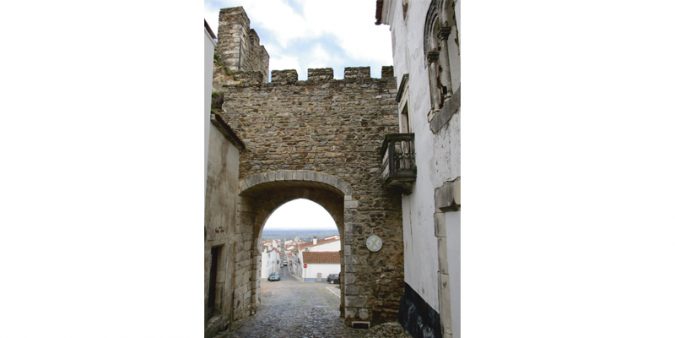 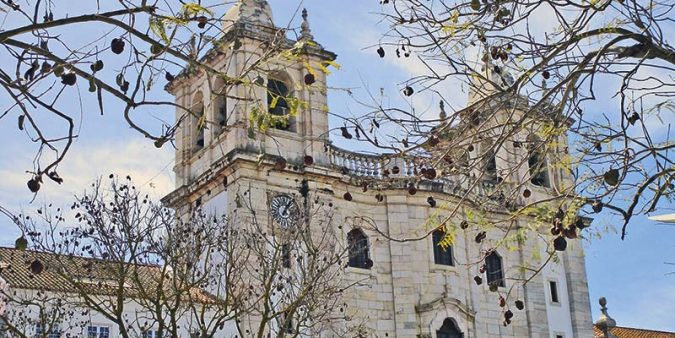 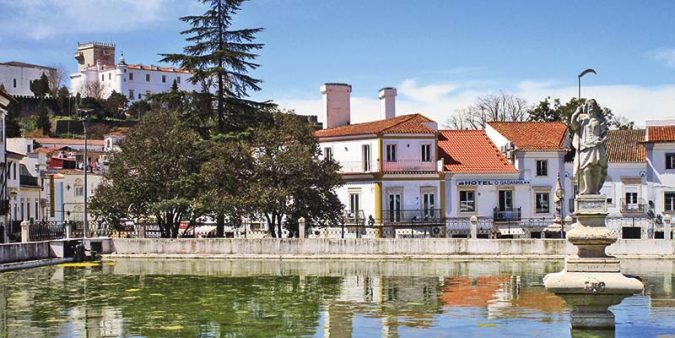 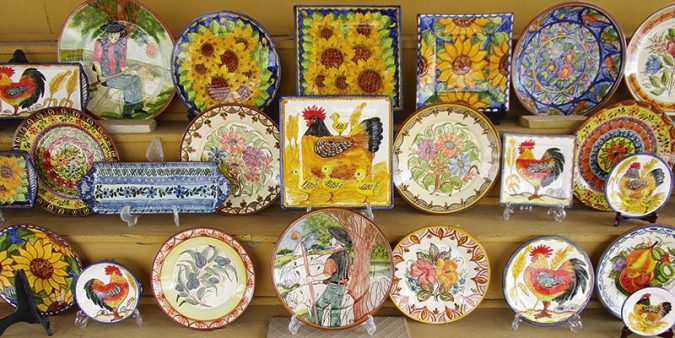 Colourful Alentejo ceramics were on sale 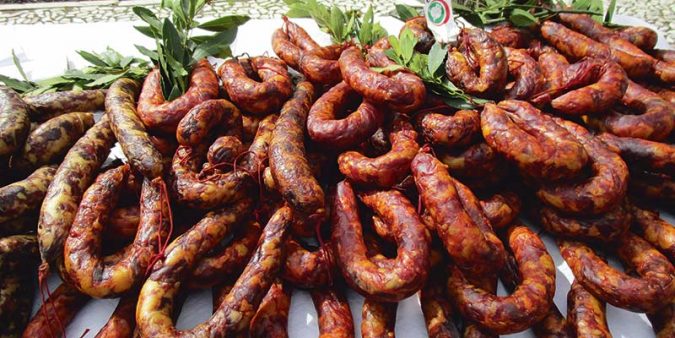 The aroma of chorizo wafted through the market