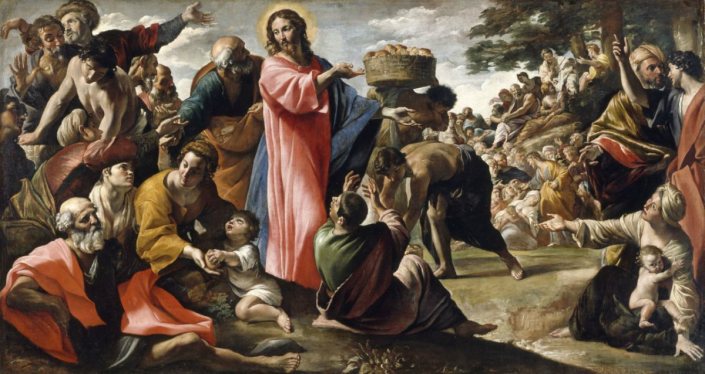 There are many ways to argue for the historical reliability of the Gospels. One compelling approach is to point to what nineteenth-century Anglican priest J.J. Blunt called “undesigned coincidences.”

These occur when you have two texts containing pieces of information that fit together in ways that corroborate each other—without the authors having colluded to plant the information. The existence of such interlocking details in the Gospels suggest their veracity. They don’t corroborate each other in ways that you would expect if the authors were colluding. They’re not conspicuous verbatim agreements on the main facts, suggesting a conspiracy, but rather random details that fit together in subtle ways that may not be immediately apparent.

So many undesigned coincidences in the Gospels have been identified that a whole book can be written on them. But let me just share two of them.

John sets up the feeding of the five thousand with a conversation that Jesus has with Philip, in which Jesus asks, “How are we to buy bread, so that these people may eat?” (John 6:5). Philip responds in distress, telling Jesus, “two hundred denarii would not buy enough bread for each of them to get a little” (v.6).

What’s important for our purposes is that Jesus asks Philip. Why does he? You might think that Jesus would ask someone a little more important, like Peter, James, or John, rather than an apostle whose name is always listed among the second tier of apostles in Scripture (Matt. 10:2-4; Mark 3:13-19; Luke 6:12-16; Acts 1:13-14).

We find a clue at the beginning of Luke’s account of the same miracle, in chapter 9. Luke tells us that Jesus took the apostles and “withdrew apart to a city called Bethsaida” (v.10). This is important because according to John 1:43, “Philip was from Bethsaida, the city of Andrew and Peter.”

Being from Bethsaida, Philip would’ve had current local knowledge of where to buy bread. Thus, we have a plausible explanation for why Jesus asks Philip. Luke provides a piece of information that John lacks, but in an indirect way that doesn’t seem to be planned; hence an “undesigned coincidence.”

But someone may object, “Of course, John 1:43 tells us that Philip was from Bethsaida, but he also says that Andrew and Peter were from there as well. So why didn’t Jesus ask Peter or Andrew? They would have had the same local knowledge, right?”

This would be true if they were all residents there at the time of the miracle. But we have evidence that they weren’t: they were residents of Capernaum. In Mark 1:21, we read about how Jesus, along with Simon, Andrew, James, and John, “went into Capernaum; and immediately on the sabbath . . . entered a synagogue and taught.” Then in verse 29, Mark tells us, “And immediately he left the synagogue, and entered the house of Simon and Andrew, with James and John.”

Peter and Andrew, therefore, although originally from Bethsaida, were living in Capernaum during the time of Jesus’s ministry. As such, they wouldn’t have known the best place in Bethsaida to buy bread.  But Phillip did.

And when Jesus entered Peter’s house, he saw his mother-in-law lying sick with a fever; he touched her hand, and the fever left her, and she rose and served him. That evening they brought to him many who were possessed with demons; and he cast out the spirits with a word, and healed all who were sick.

Why did people wait until evening to bring to Jesus those who were possessed and sick? You would think they’d want Jesus to start healing the sick and suffering right away.

And they went into Capernaum; and immediately on the sabbath he entered the synagogue and taught . . . And immediately he [Jesus] left the synagogue, and entered the house of Simon and Andrew, with James and John. Now Simon’s mother-in-law lay sick with a fever, and immediately they told him of her. And he came and took her by the hand and lifted her up, and the fever left her; and she served them. That evening, at sundown, they brought to him all who were sick or possessed with demons.

Notice how verse 21 tells us the day on which Jesus heals Peter’s mother-in-law: the Sabbath. This is why people waited until sundown, the end of the Sabbath (during which it was forbidden to do work), to bring their sick and possessed loved ones to Jesus.

By themselves, undesigned coincidences might not be fully convincing for a skeptic. But they are not meant to stand alone. They form a cumulative argument: it’s strongest when the coincidences are taken as a whole. As one author put it, “it’s death by a thousand mosquito bites.” (Being from Louisiana, I know what that’s all about!) They’re even stronger when presented alongside other evidence to make a comprehensive and convincing case for the trustworthiness of the Gospels.

by Karlo Broussard, in catholic.com

This entry was posted in Akademy, Articles, in English, Opinion, Religion and tagged Bible.