Music Review: Time of the Templars 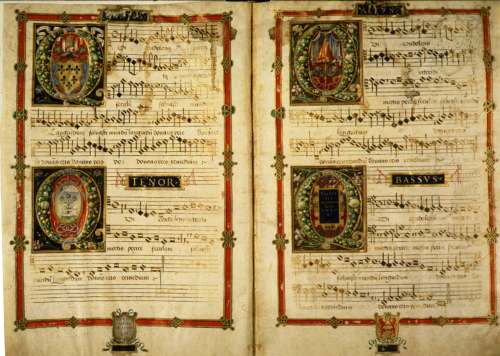 Naxos Records has pioneered the new frontier of media by using an old format – the compact disc. The label founded in 1987 by Klaus Heymann redefined the recording and marketing of classical music by providing the standard repertoire at a budget price. The label accomplishes this by using very fine but little known artists and orchestras avoiding the costly use of the named brands. This approach has the added advantage of enabling the label to also record the less-than-standard repertoire and thus offering a broader and more complete product.

In the past 20 years, the label has released an impressive repertoire on an equally impressive number of CDs. Naxos has further branched out into an internet subscription service, audio books, and educational products. While these offerings are notable, Naxos’ true genius is no better manifested than when blurring the lines between these products. The label’s release of the boxed set Time of the Templars is a case in point.

Ever since the publication and overwhelming reception of Dan Brown’s The Da Vinci Code the reading public cannot get enough of all things Templar; Note the flood of Templar related fiction that followed The Da Vinci Code: Steve Berry’s The Templar Legacy, Raymond Khoury’s The Last Templar, and Jorge Molist’s The Ring: The Last Knight Templar’s Inheritance only to mention a few. Add those books dealing with the period of the 12th through the 14th Centuries and a detailed picture in words of medieval life emerges.

Naxos, with its extensive catalog of alte Musik or early music, is uniquely positioned to provide a soundtrack to this picture of words with Time of the Templars. This three-CD boxed set is divided into three areas of focus: “Music for a Knight,” highlighting both the secular and extra-ecclesiastic sacred music of the period, “Music of the Church,” concentrating on plainchant as practiced in monasteries, and “Music of the Mediterranean,” encompassing low country music and the music of Israel and Islam.

All of the music assembled here was previously released from several recordings by early music performers. What the Time of the Templars offers both music and listener is a fixed context in which to listen to this music. This writer listened to these selections while reading Ken Follett’s Pillars of the Earth (1989) and its recent published sequel, World Without End (2007). For Follett’s expansive survey of 13th and 14th Century England, Time of the Templars provided the perfect aural picture of the period, enhancing the stories.

“Music for a Knight” is a bit of a sampler of the music a Knight would have heard, whether he be at church, in the court, or on the road toward Palestine. Thus, the music is divided approximately equally between the sacred, the profane, and the entertaining. Presented here are several selections from the text “Carmina Burana” (made famous 800 years later by composer Carl Orff for his secular cantata of the same name). Hildegard von Bingen provides settings for several sacred texts, among them her beautiful “Kyrie Eleison” and “Alleluia, O Virga Mediatrix.”

Hildegard von Bingen’s music is not of the pedestrian church variety of the period. This is music of mystic ecstasy. If Heaven exists, Hildegard caught a glimpse before composing. Richard I “Coer de Lion” (Richard the Lionhearted) provides his “Ja nulls homs pris,” his only poem to survive with his music, written while he was imprisoned in Durnstein between 1192 and 1194. Polyphony is represented by the Notre Dame School composers Leonin and Perotin in the 4-part organum: “Notum fecit” and the 4-part conductus: “Vetus abit littera.”

“Music of the Church” is what even the novice historian would expect: Gregorian chant. This is a complete disc of a cappella monophony, elements of which can still be heard during the Responsorial Psalm of the Mass today. This is peaceful music well performed. No sounds can more quickly evoke the sights, scenes, smells, and sounds of the Middle Ages. “Music of the Mediterranean” exposes the listener to music from the Christian, Jewish, and Muslim traditions. It is interesting to note how music equalizes cultures with an art that is truly universal.

This entry was posted in in English, Music, News, Opinion.