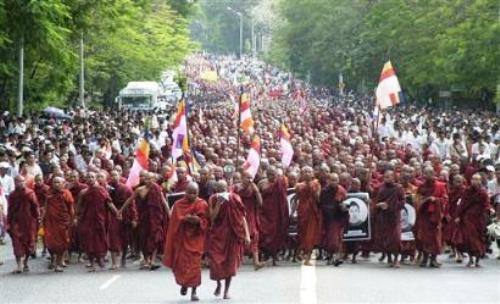 There are reckoned to be 400,000 monks in Myanmar (formerly known as Burma), about the same as the number of soldiers under the ruling junta’s command. The soldiers have the guns. The monks have the public’s support and, judging from the past fortnight’s protests, the courage and determination to defy the regime. But Myanmar’s tragic recent history suggests that when an immovable junta meets unstoppable protests, much blood is spilled.

In the last pro-democracy protests on this scale, in 1988, it took several rounds of massacres before the demonstrations finally subsided, leaving the regime as strong as ever. By Thursday September 27th, with a crackdown under way, and the first deaths from clashes with security forces, it seemed hard to imagine that things would be very different this time.

The latest round of protests began last month, after the government suddenly imposed drastic fuel-price rises. At first, the demonstrations were fairly small. It looked as if the protests might fizzle until soldiers fired over the heads of monks demonstrating in the central town of Pakkoku. The clergy demanded an apology, setting a deadline of September 17th. The next day, their demand having been ignored, they took to the streets.

At first, the regime’s forces stayed out of sight. On September 22nd, a group of monks and laymen was allowed to pray outside the normally heavily guarded home of Aung San Suu Kyi, the leader of the opposition National League for Democracy (NLD) and icon of Myanmar’s struggle for democracy. Miss Suu Kyi’s public appearance—her first since she was detained four years ago—proved a boon to the demonstrators. On Monday the protest in Yangon, Myanmar’s main city, was said to be 100,000-strong.

That night the regime broke its silence. On state television and radio, it warned of unspecified action “according to the law” if protests continued. The next day the protesters defied the threat, staging a demonstration at least as big as Monday’s. Soon after that march ended, troops and riot police moved into positions around Yangon. On Wednesday the authorities announced a two-month night-time curfew and troops surrounded monasteries in the city. But swarms of protesters again poured on to the streets, defying tear-gas, warning shots and baton charges. The first deaths, including of monks, were reported. On Thursday, troops burst into monasteries around the country to make arrests but, again, this did not stop monks and laymen from hitting the streets, where riot police shot at them.

The regime may be trying to calibrate its response to the protests, using limited force at first to quell opponents. That said, it still has elite disciplined units which would be unlikely to flinch if ordered to open fire on unarmed monks and nuns. If there are any cracks in the junta’s unity, nobody outside knows about them.

Myanmar’s junta has survived in part through diplomatic triangulation. Like North Korea, it has borne isolation and rhetorical hostility from the West by cosying up to the neighbours, notably China. And it has tried to avoid total subservience to any one of these by playing them off against each other.

As in the past, the world’s initial response to the junta’s violence was marked by bickering and point-scoring. On September 27th, the United Nations Security Council met in response to pressure from the West for co-ordinated sanctions. But Russia and China argued that the unrest was an internal matter that should not be on the council’s agenda at all. America announced new sanctions against the regime, in keeping with a policy some Western countries have pursued for nearly two decades. They are cheered on by a vocal and well-organised exile movement, and, when she was able to make her views known, by Miss Suu Kyi herself. Her heroic stature has helped make Myanmar a fashionable cause.

Shareholder-activists and ordinary consumers in the West have also done their bit to encourage a boycott. But isolation has never really been on the cards. Any gap is eagerly filled by Myanmar’s neighbours—not just China, but also India and Thailand and other members of the Association of South-East Asian Nations (ASEAN). American leaders have insisted the junta honour the 1990 election result, won by Miss Suu Kyi’s NLD, and step aside. To this end, they have already imposed wide-ranging sanctions. The European Union has been more equivocal, and its sanctions correspondingly milder. Japan, Burma’s biggest aid donor until 1988, has been softer still.

If any countries can sway the junta they are the regional ones: ASEAN, especially Thailand; India; and above all China. China has given the junta diplomatic support, helping for years to keep its behaviour off the agenda of the United Nations Security Council. But Myanmar is far from a client state. This week Chinese spokesmen called for restraint in responding to the protests. Their pleas seem to be falling on deaf ears.

Even if pressure both from within and beyond Myanmar’s borders causes the regime to crumble, the country’s troubles would still be daunting. Many of the ethnic minorities continue to distrust the majority “Burmans”, even including the democrats. And the NLD has been gutted by years of oppression. Miss Suu Kyi, inspiring figure though she is, is an untested leader who has perforce been woefully out of touch with events.

As in 1988 and 1990 the Burmese people have shown they want to choose their own leaders. In the past they did not fully reckon on the ruthlessness of the people they were up against. One day, as with all tyrannies, Myanmar’s will fall. But much blood may flow before that day dawns.

This entry was posted in Articles, in English, News, Opinion, World Watch.